The First Books That Charles Used to Disciple Susannah

When Charles Spurgeon wanted to help Susannah with her spiritual growth, involve her in his sermon study, or spend time with her for mutual encouragement, he looked to books. Perhaps you will likewise use good books to bless others and for your own edification. What books/authors did Spurgeon choose?

1. The Pilgrim’s Progress by John Bunyan. This book guided Charles from his childhood and he read it 100 times before he died. As much as Spurgeon loved P P, he intimated that he valued The Holy War by Bunyan even more. P P was his first gift to Susie.

2. Thomas Brooks. Though in 1855 the collected works of Brooks had not yet been published, a number of his volumes were available. Charles asked Susie to comb through a particular volume by Brooks and to pluck out a few salient quotes. The result was a book: Smooth Stones Taken From Ancient Brooks.

3. The Poetry of George Herbert. Spurgeon asked Susie to read to him from the poetry of Herbert for his own benefit. However, Susie found such times to be helpful to her and she enjoyed them very much.

4. Various Puritan and other Reformed writers: Thomas Watson, Richard Baxter, Thomas Brooks, and John Calvin were a few of Spurgeon’s favorites. On Saturday evenings, towards the end of Charles’s sermon preparation, he asked Susie to read to him from various commentaries. She saw those times as good training for a pastor’s wife.

5. The sermons of Charles Spurgeon. The first wedding gift that Charles gave to Susie was the first volume of his Sermons.Spurgeon had a copy by late December of 1855. Susie never tired of books that came from her beloved’s own hand.

Books were part-and-parcel of Charles and Susannah’s relationship from the beginning. His first gift to her was The Pilgrim’s Progress; her first gift to him was a set of Calvin’s Commentaries. When Charles revealed to Susie his love for her he used Martin Tupper’s book, Proverbial Philosophy. After Charles died, Susie said that his 12,000 volumes were her most precious possession.

Charles and Susie read books, collected books, gave away books, and both were prolific authors. From 1875 until her death in 1903, Susie gave away 200,000 books to poor pastors through her ministry, “Mrs. Spurgeon’s Book Fund.”

How can you better use books in your relationships with others?

Ray Rhodes is the author of the upcoming book: Susie: The Life and Legacy of Susannah Spurgeon by Moody Publishers. To schedule Ray to speak for your next event, contact him here 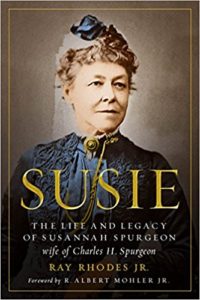 Not Another Baptist Podcast